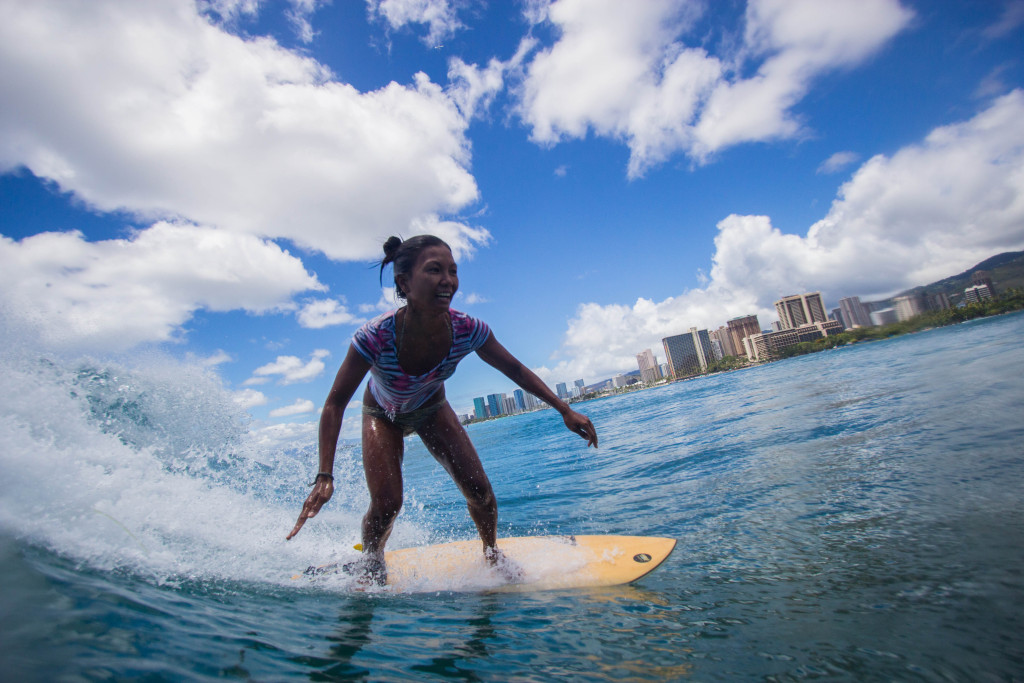 It was the beginning of summer in 1994 when I first fell madly in love.   There I was, afloat a 10-ft, banana-yellow tanker my father borrowed from a friend.  White Plains on Naval Air Station Barbers Point, on the leeward side of Oahu, was once only accessible to military personnel, their dependents, and their friends.

It was a struggle to keep my balance on the “banana boat” despite the buoyancy it provided, but it was an even bigger challenge to keep the mixed feelings of fear, anxiety, and excitement of being all alone (I most definitely was not) and so very far (maybe 15 feet) from the shore.  In retrospect, learning how to surf at any age, whether at 16 or 60, is like being sucked into a portal that skews one’s perception back to adolescence when everything is a thousand times more dramatic.

So there I was on a giant longboard with the nose pointed to the shore the entire time I floated.  In my head, the waves felt like tsunamis and white squalls, but in reality, the waves were perfect one-footers on a rare, glassy mid-day in Kalaeloa.  I laid on the board on my belly and straddled the rails with my legs– an awkward leg hug– the quintessential kook move.  I could see my family under the covered picnic table– the ironwood pines did not dance above them like they often did.

I don’t quite remember the moments just before, but in what felt like a blink of an eye, I went from daydreaming about the pains and agony the pinecones inflicted on my bare feet and other random thoughts per second to being on my feet.

And so there I was, surfing (and flailing) for the very first time.  As I glided, the fear and anxiety that kept my heart beating out of my chest dissipated and all that was left was unfiltered joy.   The random thoughts and silly inner monologues quieted down and I was left with a sense of mindfulness that I didn’t even know was a thing.  For the first time in my life, I was free of any thoughts, good or negative.  The only thing that mattered to me was that almost unbearable feeling of pure happiness.   At 15, I caught my first wave that ultimately changed my life.

Unfortunately for my dad, the first wave also changed his life– well, his weekend at least.  My first wave that afternoon was also my last that day because while caught in my present ecstasy, I failed to plan out my wave kick-out.  Again in retrospect, I never had an exit plan.  In fact, I never had an entry plan, so it really was a surprise that I caught a wave (or rather, the wave caught me!).  In any case, the wave and I rode the banana tanker all the way to the beach–literally.  I got off the wave, like a rodeo clown bucked off by a bull, when the board dug into the sand embankment breaking the tanker’s glassed-on fin in the process, which my dad had to fix that weekend.

I remember getting up and looking like a malasada–a malasada with the biggest grin across the face.   That August, I turned 16 and my parents gifted me with a brand new, cherry red, 7’6”, mini-tanker and a pair of diamond studs.  The earrings hardly made it to my ears, but the board and I were inseparable.  Diamonds may be a girl’s best friend, but I can’t ride those.  So there…

Read all posts by kshRB1admin